Hello everyone! Its two months allready since i pre-released the game on itch and few other places and took much needed break. During that time i ve been working on the game casualy as past two months was mainly about catching bugs, fine tuning of difficulty and polishing details. Now, finaly, this ride is over, or at least main part of it and im glad i can announce to you:

It took a while, but game was finaly approved for Desura store and its kind of feel like crossing the finishing line for me. I hope you ll like this little shmup as the game got few positive reviews allready abd you can check them in press reviews list below.


Hope you ll enjoy the game as i was trying as hard as i could and i would like to thank you for all the support i got during the developement as every new watcher, comment, retweet, fb like helped me to finish this project.

Summary of changes and additions since prerelease:


You can get the full version below:

Posted by Tryzna at 6:36 AM No comments:

As you might have noticed, there is nothing going on for quite some time on my blog and i want to apologize for that, as yes, i ve been painting but lost will to share my work with others. Meanwhile i moved on from painting somewhere else, still its a creative hobby and as you probably allready noticed i started working on a video game. I tried that many times over the years but always failed to gather reliable team and someone always srewed up. Nowdays, im working really hard to pursue one of my dreams and hopefuly in couple of months game ll be finished, i ll sit back and return back to painting untill i ll start working on next project. Sorry for offtopic, thanks for reading, hope you ll check back later as still there is lot of wip figures on my desk and few almost finished display bases so i ll have plenty of stuff to show, but right now im occupied elsewhere, if you are interested and like indie games you can check my dev diary by clicking on picture or if nothing else, u can watch a first teaser.

Thanks for reading & have a nice weekend! 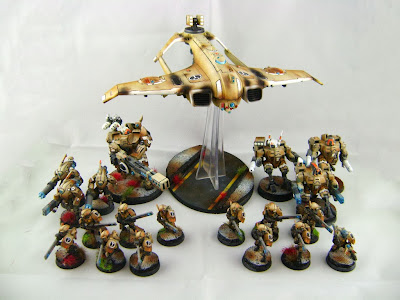 Hello everyone, after couple of months of blogging break im back with my new project i ve been slowly working on for last couple of months. Those few followers who remembers first posts here knew i was building tau army at that time and was expecting new tau codex soon. However rumors turned out to be fake and i sold the few models i had finished stating i ll start again when the new codex ll come out. Unfortunately for me tau dex came out just when i started my grey knights army so i did not started right when new models became aviable but delayed the start untill i ll have my gks ready for casual games.
And the time has come, still have some work left on the grey knights but i bought tau battleforce and couple of models allready and here is what i can share with you. Not much, just tau flier, squad of fire warriors, stealth suits, few battlesuits and XV88 finished for now and decided to take group photo as it began look nice;-)
Still have unopened boxes of fire warriors and another XV88, plenty of drones and piranha from the battleforce. After these few models i ll probably add pathfinders and hammerhead, have a couple of low points games and then i ll decide what to add next(tempted to buy swarm of remora drones).
Hope you ll like whats done till now, no painting notes for now as i want to make tutorial on painting piranha and all the colours ll be mentioned there.

Thanks for reading and hope u ll visit this place again!;-)
Posted by Tryzna at 12:18 PM 3 comments:

Email ThisBlogThis!Share to TwitterShare to FacebookShare to Pinterest
Labels: tau 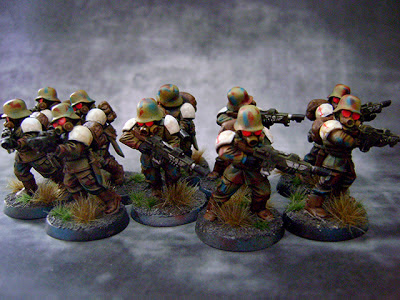 Hello everyone, finaly i pushed my self to paint at least ten guardsmen to act as warrior acolytes in my grey knight army. I wanted to make them look at least little interesting when compared to regular cadian guardsmen so ive spent some extra time while asembly. First and obvious adjustment is use of heads with gas masks and frizt like looking helmets from forge planet. I liked them when i ve seen them on forge planet website so i ordered them along with walker autocannon arms couple of months ago as i knew i ll probably want couple of guardsmen in my army. They look great, but they are bigger then i expected so my henchmen have heads big like baloons but it looks just fine and panic i felt when i tried to glue first head to the body was unneceseary.
Second little extra is that i ve added bag to each ones back. I had just one so i had to make copies and as im time press right now and have to finish this army in just couple of days i had to simplyfy copying process by half. I ve made on sided mold from green stuff and when it hardened enought ive been pressing little balls of green stuff in to it. Unfortunately i did not had enought time to make even one sided copies properly and have to remove parts from mold when gs was still soft so they are not precise copies but they are just fine for they purpose of beign carried around by humble guardsman.
These two adjustements to regular cadian was enought for me to make them look interesting. What a shame i   ve been delaying finishing the army so much i dont have more time to add cables from las gun to bag to make them look like hot shoot lasgun but i dont care much as they are probably going to act as cheap objective camping unit or driving around in chimera(in next stage of my grey knights project).
I simplified painting as much as possible as well but i ll sum it below in painting notes. In the end i quite like how they look, i think i might enhance lenses on their gas masks if i ll have hour or two of free time before i ll pack them in to army transport case next week. But other than that i like how they turned out, compared to regular guardsmen. See you soon by more updates as i ll be finishing 1500point army in two following days. Thanks for reading & see you! 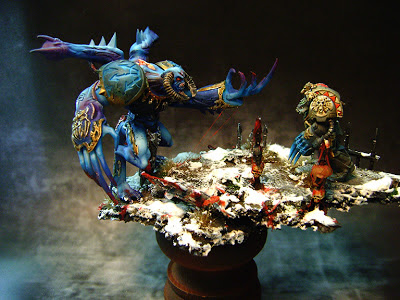 Hello everyone! Not even a week and im back with another diorama. This one was not planned but here is it. I found bits of a demon prince in one of my bits boxes couple of days ago and i just did not resisted urge to paint this dude. I painted this daemon prince 3 times last year and then i enraged as i was still not happy with paintjob and stomped on him to release my anger.
Fixing this dude was not easy as he had broken legs, broken arms and broken wings. However i found box with rest of the bits si i could replace wings torsos. Replaced one of the arms(sword was bended and broken so i could not fix it) and started painting. 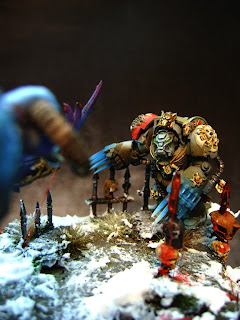 I did not expected it ll start turning out as good as it is right now and diorama was not planned at all but as i had allready painted another space wolf on my table i tought "why not?" and base was built within the moments. I did not created anythink epic as when you examine daemon prince carefuly u can still find the places where he was broken, its noticable this is fourth paint on him and thats why i did not wanted to use some of the parts i keep for other projects. However when looking at the scene its a bit shame a chose as simple as possible way as i like it a lot, but thats what is it and i learned another valuable lesson, to never underestimate how impresive even borken model can be;-)
Enjoy the pictures, enjoy the video, u can rate the model HERE if you want and thans for reading!

Hi everyone, here is reworked diorama i showed you in last post. Everythink was said in the video so just click play button and enjoy! Thanks for visit;-)

Posted by Tryzna at 9:11 AM No comments:

Come Get Some! - another 40k mini diorama

Hi everyone, here i am with probabbly biggest base i ve constructed till now;-) Its made mostly from the cork, few 40k bits i had laying around my desk and three tubes of super glue. Please note this is still as a work in progress as im not happy with the termagants and they ll be replaced by somethink little bigger like tyranid warrior or lictor when i ll have trip to hobby store and free cash to buy it. Actualy termagants here are not that bad, when under naked eye. Problem is i gave their carpace parts coat of gloss varnish as i wanted to give them slimy, light reflecting look and it looks exactly as i wanted and its great when looking at the scene on my table but not on the picture:-/  Im having big trouble taking a proper picture as scene is so big and i struggle to light it properly and focus camera on a whole. I decided to give up right now as im going to replace termagants anyway in near future and take proper pictures when i ll be 100% happy with the ressult.
Posted by Tryzna at 9:03 AM 4 comments: